Three men were waiting outside the lobby with files in their hand. G-attract Razor Company Limited was looking to recruit new employers to market their products. One man was tall, looked intelligent with his breads, the second one was sporting stubble looking stylish and the third one was medium height and wore a clean shaved look.

A little talk has shown that the third man had scored very less and cannot compete with the other two. The other two were trying to be nice telling him that his scores will not be up to the mark of the reputed company and told him not to regret if he does not get the job.

Secretary: Lady Boss is ready for the interview.

Beard > Stubble > Clean shaven - Let's see who made it and how

The first and second who went inside came out somber. It was now the third man's turn. He tried to look composed and entered Lady Boss's room.

Within an hour, he returned with a huge smile on his face. The other two looked at him in disbelief when he showed them his recruitment letter.

" What was the secret Man? How come? " they enquired. 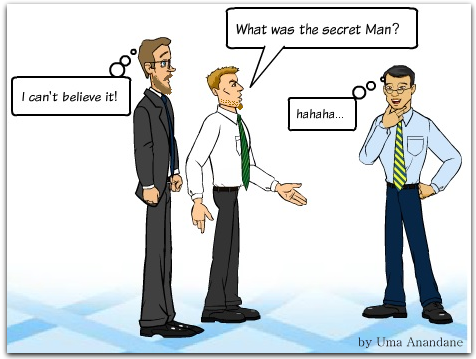 The third man looked at them, brushed his chin and said , "My clean shaven look bowled her over”.

" Yes! What else will they look for in a Razor Company that too for marketing their products, " he replied " some times commonsense works better than scores " he whistled.

Posted by Uma Anandane at 09:57
Email ThisBlogThis!Share to TwitterShare to FacebookShare to Pinterest