Smells
old and new
the storage boxes
of remembrance

the old tickles our mind
and asks "do you remember me?
that old books on the library,
the aroma of the sand when drenched in rain,
scented flowers brushing your nose
and mama's recipe , my favorite dish"

The other end the new slowly hangs on to a place
carefully sealing itself under the neural jelly
adding and mingling with the old
to be recalled again as a whole
when my nose buds feels the aroma
as my brain start researching
what's the ingredient of the smell is  ...


You might like to read articles from my other Blog ..check the right-hand side for"Articles from My other blog" ..you never know what you stumble upon to.....

9 comments: Posted by Uma Anandane at 11:00
Email ThisBlogThis!Share to TwitterShare to FacebookShare to Pinterest

I find it easy to portray me as a Poet which I found out during my writing journey. Having a degree in Engineering, I found myself quite well in fixing pieces of words together and getting them published.

What is a poetry? If some one asks me this question, I have two answers with me.The former being "Poetry is an ART where we paint the pictures with our words" and the latter is "Poetry is my self-expression".  Here I mean self -expression because I try to relate (fantasize ) myself with the characters I write taking into account all aspects of life .

My Blogs
Inside My Poem Book - the name was born for tagging it in Google search
Perpetual Mind - this name says exactly what  I blog , all that buzzes in my Mind

Apart from my Blogs "Inside My Poem Book ", which is my debut start of Blog writing Poems followed by Perpetual Mind , wherein I blog Articles and write Reviews , I have also Published my Works both Online and in Print.
E-Books
RHYTHMUS (via Smashword) - This is my best unpublished works with dreams and hopes woven at my best into poems.Even now when I read them ,I drown myself into the beauty of the poems.I am sure you will like them too.It is also available at Barnes & Noble  , Apple iTunes , Sony Reader , WHSmith for NooK books. Read the sample pages Click here.... 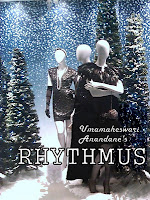 INSIDE MY POEM BOOK @ AMAZON- My debut eBook with published and unpublished works .I loved when I worked out this eBook into Kindle edition for Amazon Kindle Store .It was a dream come true. Now available at Winkstore , Infibeam and Pothi too. 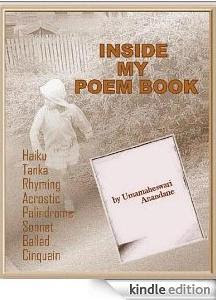 
Another one in the making of The Project Humming Bird by Fountain Guild Pen on the National level :)

No comments: Posted by Uma Anandane at 03:12
Email ThisBlogThis!Share to TwitterShare to FacebookShare to Pinterest

"Vande Mataram" -the Songs of the Indian Soul

"Vande Mataram"
this musical words
cuts chords of the string
covering the soft walled hearts
to let out that feeling
"to be Free..."
This land of Bharatam
stands now on its own feet
having its own breathe of
" Freed air "
Unforgettable legend
reminds each one of us
still alive on this mud
the days of shed bloods
countless number of tears
and unanswered prayers
Stand now to
the words of our leaders
spread the light and
have the will
to celebrate this day
answering those
shed bloods and tears
to live each passing day
in UNITY and LOVE
"Vande Mataram"
Indian flag comprises of three colors saffron,white and green in equal proportions.On the middle is the wheel in navy blue color comprising of 24 spokes and this Emblem design is adapted from the Lion Capital of Ashoka at Sarnath on January 26, 1950.The ratio of the width of the flag to its length is 2:3 and the diameter of the chakra approximates to three-fourth of the width of the white band of the flag.Indian flag is also called as Trianga.
I could remember my school days, when our principal hosts the flag and we the students, singing the National Anthem song in chorus.She used to pull the flag high and slow and when spread ,showers the rose petals upon her head and the students nearby .It was such a unique look seeing the hosted flag flying pridely to the waves of the brushing breeze.
National Elements
National Tree : Banyan
National Flower : Lotus
National Fruit : Mango
National Animal : Tiger
National Game : Hockey
National Song : Vande Mataram
National Anthem : Jana Gana Mana
Natianl Emblem : The Lion Capital
National Calender : Saka Calender
National Flag : Tiranga


The National Emblem (as seen in the above picture) symbolizes India's commitment to world peace and goodwill. You can see four lions (three in front and the fourth one behind) .The lions symbolizes power, courage and confidence resting on a circular abacus which in turn is girded by four smaller animals named as  guardians of the four directions: the lion in the north, the elephant in the east, the horse in south and the bull in the west. The whole of the abacus rests on a lotus in full bloom meaning the fountain of life and creative inspiration. Below it is inscribed a word /motto 'Satyameva Jayate'  meaning "Truth Alone Triumphs".
Life is Only Once , Short and Precious ....Lets learn to Live in Unity !!
Another Independence opening a gateway (Support Causes)
FOR A CORRUPT FREE INDIA MOVEMENT
Joining Hands (Lokpal Fasting) on ....16th August 2011

5 comments: Posted by Uma Anandane at 14:46
Email ThisBlogThis!Share to TwitterShare to FacebookShare to Pinterest

Free verse is this week exploring poetry prompt.As the name says, you are free to write any verse without following any poetry patterns, rhyme scheme or any other musical pattern.But you are free to use, phrases , simple words, recurrence or create images with your poem.Below is my free poem that I wrote using my experience .I dont want to let the suspense so fast.Read on to find it and leave your comments below
Exploring Poetry : Free Verse

a clasp on both hands
tied tightly and
lifting me slowly
above the ground
a transparent wing grew
it grew larger and larger
as I fly higher and higher
swirling like a tornado
I started to shout
laughing hysterically
it was magical
How did I continuously laugh?
10 min
5 min
.
.
.
Hey! enough stop .
It's over
I got down
from the fun fair saucer ride


You can check more poetry forms by clicking here.

13 comments: Posted by Uma Anandane at 07:24
Email ThisBlogThis!Share to TwitterShare to FacebookShare to Pinterest

Pleasure to have friends
who lights up your surroundings
'Disguised fireflies' 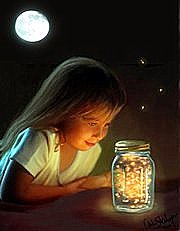 
Happy friendship Day to all my friends!!

9 comments: Posted by Uma Anandane at 12:45
Email ThisBlogThis!Share to TwitterShare to FacebookShare to Pinterest

A tinge of yellow
rotating at high speed
shines brighter
to a full yellow circle
throu' the effect of
spinning blades
recalls resemblance
a bright ball of fire
spinning around
marking the Sun by
gravitational mass
Black holes ,do they
exist in the above both
between
the producer of wind
and
the generator of heat
without which my earth
challenges to exist ?
This is me :
To bring out the sparkling light of creativeness in you ,
you got to burn the oil of time and space -  ©Umamaheswari Anandane
D'verse Poets :
Redundant phrasing - Words, phrases, lines, stanzas, even, that are unnecessary according to me are :[ rotating ] at [high] [ speed], [The spinning] I repeated ,[by] gravitational [ mass] and between  [the producer of wind] and [the generator of heat]
I Love to Rhyme - Poetry Links Ups going on
Feel free to submit your links either in the Linky widget or the comment section below 'I Love to Rhyme' link page .