A Smile that transforms your life .....

Presenting the real beauty of Woman along with a poem which is a small comparison between the old age woman and the new age women.This was born as a result of a conversation we had along with a friend about the woman today.
Husbands :  Can a wife be capable enough to be compared with our Mom ?
Wives : We are more than that .We can transform between the two , being both modern as well as traditional.
Along with this comparison ,I tried to bring in the real beauty of a Women which is "HER SMILE
Good Old Days
a dissipated image
of his Mom appears on his mind ...
She gets up in the Morning,
cleans the house ,
waters the verandah
and decorates the doorsteps with kolams
Then she freshens herself ,
dresses beautifully in a saree
comes to her room to wake
her husband ,sound asleep
with a massage on his feet
slowly waking him up
and then handling him
a hot tea or coffee
she waits till he drinks it
and then takes it back to the kitchen
again ,she enters with a towel and bursh
for him and says,
"you water is ready in the bathroom"
He comes near her and lands a kiss on her forehead.
He woke up staring now at
his newly wed married wife
educated from aboard
as she kisses his forehead
waking him up
Good Morning dear
Your coffee is ready
She looked fully dressed with make-up
She smiled at him
That smile made his day
A Women's Smile !
Contagious Gift worth receiving
He hardly heard what she said,
"And yes,forgot to tell you
I have an important meeting today
Your breakfast is ready
Freshen up and lets meet at noon"
She went.....
He sat on his bed
and with a remote ,
switched on the music in his room
and slowly took the coffee
made from a coffee maker
sipped in the aroma as he drank it
it's the new three in one Nescafé
He thinks,
"everything is
presented with the changes
that is required with
the fast moving world for good
Why not let his wife be one among them ?"
The Real beauty of Woman is "HER SMILE".A simple curve on her face does the Magic . It's a powerful potion of Love . It comes naturally when we like someone .It does the magic of transforming your surroundings with happiness.A Women who spends most of her time with children and relations needs the importance to have this smile as a part of her life .A smile is worth sharing and passing to the known and also the unknown.


Mother Teresa :“Every time you smile at someone, it is an action of love, a gift to that person, a beautiful thing.”


A smile is contagious ,it spreads from one person to another making or transforming their life into a bliss for a second .A women's smile spreads around her family making relationships healthy which in turn makes her happy .She wins hearts with her smile .Every art ,has a smile in it be it a photograph , poem or story .We love stories with happy endings .Everyone love to smile and even more see others smile .When a women smiles , her eyes in turn smiles lifting her face making it more attractive .


A Smile is a contagious curve thats spirals around each and every soul making life appear beautiful .That is in fact the Real Beauty of any Women .She holds the magic wand in between her lips :) :) :)

17 comments: Posted by Uma Anandane at 10:11
Email ThisBlogThis!Share to TwitterShare to FacebookShare to Pinterest

Fortresses, Castles, Palaces and Royal houses Inside my poem book

You you want to know /explore more poetry forms with explanations and examples ,do visit "Exploring Poetry" where you can find links of many poets and their poetry form .
The above poem " Another Cinderella Story " is written in Villanelle poetry form and is featured in RiikaInfinity's TOS and Jingle Poetry Potluck .

12 comments: Posted by Uma Anandane at 16:26
Email ThisBlogThis!Share to TwitterShare to FacebookShare to Pinterest

An Invitation plays an important role in each and every Marriage .The invitation and its written words has a story to tell.I still remember how my grandma takes her glass and sits on the sofa as she reads each  Marriage Invitation she gets in our home .She tells the history of the family as she reads them . My mother joins my grand-ma and soon they start to discuss thing and we all hear them with our ears open as always.Such information it has as they seems to be .

Okay what can we find? I can hear you ask me.

First of all , the way in which the invitation is presented says how well-off the family is . Then few details of the Couples (bride and bridegroom) and their family details are given like who they are and what they do .Its like giving the details of the extension of the families.The bride's family binding with the bridegroom's family making them as ONE through this marriage knocks each and every door of their relatives and friends.Then ,the information of about the place and the timings of the marriage is given.The last page always has the details of the related family members of both the bride and the bridegrooms ,mainly their name and their work details . Few people also add photographs of themselves in the front page of the Invitations .Can 't it be enough ? Yet , we all love them .Giving and Receiving Invitation is a token of respect in Indian and almost in any cultures.x


Every Invitation has a story to say ....

Every Invitation
has a story to tell
and a new message
to convey, "Extension
of Families"

You can explore more of poetry forms in "Exploring Poetry" and if you want something in writings like thoughts and fun ,you can always visit here .

29 comments: Posted by Uma Anandane at 13:22
Email ThisBlogThis!Share to TwitterShare to FacebookShare to Pinterest

The NaPoWriMo 30 days 30 poems challenge got over in April 2011 and made me learn few new things in Poetry.Every prompt was a challenge and was a great brain teasers too .My blog was filled with new ideas and poems after this challenge.Wait...do I hear some other challenge out there : D.

RECAP of NaPoWriMo-Month of  April
I was satisfied with the results of all my poems and I personally favor few :  Ekphrastic poetry  , color poem, Homophonic translation, Mirrorpoem,Royal Wedding,Riddle poem ,Ghazal ,old photograph,autobiographical poem ,Oxymoron and Greek myth .

No comments: Posted by Uma Anandane at 06:33
Email ThisBlogThis!Share to TwitterShare to FacebookShare to Pinterest

Exploring Poetry
To My Mother ,
A special card designed specially for you : D 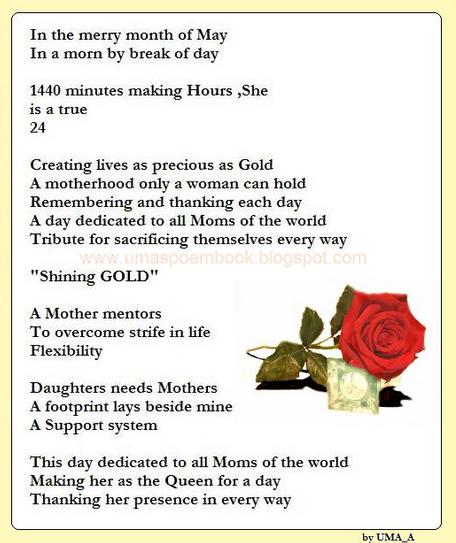 You had a small and sweet Kingdom
With two Princess and a Prince
The King ,my father knows that
His Queen  my mother worths a special
Applause for not only this day
but with each and every passing seconds
I pray all the Angels in heaven
To safeguard this little Kingdom and it's generations
Always and ever in safe hands of the Almighty !
Yours
Daughter :)
This week in " Exploring Poetry ", I ask you to try writing a picture poem as above .To write a "Picture Poem"
So are you ready to write and link.After you have done do link in below .

11 comments: Posted by Uma Anandane at 16:19
Email ThisBlogThis!Share to TwitterShare to FacebookShare to Pinterest

Poems on Greek myths Narcissus and Echo in my Poem Book

Greek Mythology are myths from very old or ancient times including stories about Greek Gods and Greek Goddesses, Greek Myths and Greek Heroes like Achilles and Hercules .I have written a poem about the PANDORA'S BOX which in turn is a poem from a Greek myth .If I take to write poem of the Greeks myth ,I will have nearly as many poems to publish another book. If you are the one who is interested in Greek Mythology ,you can find many stories here .The final poem for NaPoWriMo's prompt is to write a poem based on a Greek myth.


The Story Of Narcissus and Echo
The son of God Narcissus was a very handsome man
but proud enough to turn away womans proposing him
he even turned away a woman nymph called Echo
who loved the Narcissus as much as she can
Echo though beautiful had a speech problem then
a curse for her big mouth , now she lay helpless
one day as Narcissus got lost in the woods
all she could is to repeat the words said to her when
ever he called out "Is anyone there?"
Echo used to reply "Here, Here".
upset of not being loved in return
Echo hid herself in a cave
with nothing left except her voice in
A Goddess maiden heard about this somehow
got angry and cursed him to fall in love
with himself - Narcissus
Even as Narcissus was admiring himself in a clear pond
Echo noticed that he fell in love with his reflection
As he vainly said to his face in water "I love you"
Echo replied from the cave and within "I love you"
with whispering thoughts of Narcissus
He stayed admiring himself
in the pond forever
till one day he died and grew as a flower
called Narcissus
Even now in the caves you can hear
Echo senselessly repeating the words of others
you can also feel her vibrations as you near
with echoing your voices further and further
The Whispering Dewdrops
Exploring Poetry

9 comments: Posted by Uma Anandane at 09:13
Email ThisBlogThis!Share to TwitterShare to FacebookShare to Pinterest

Spoetry or spoems from the spams in my gmail inbox

What are spams ?For newbies ,Spam are nearly identical messages sent to numerous recipients at the same time like a unsolicited bulk messages using electronic messaging system.Our sensitive inbox of google or yahoo identifies them ,since many recipients of the same mail system gets the same messages and so they are directly sent to our spam boxes.
Spoetry or spoems are poetic verses made primarily from the subject lines of spam e-mail messages.Making poetry of this kind is interesting and funny.I had to get few words from here and there making it a poem and yet deliver the same message that I got as spam .
Let me choose few spams from my inbox and then write a poetry with it.
The original mail in my spam box regarding the same :
Spoetry in Haiku style.