It's love once again
A second chance in place
to prove my worth, my grace
for you did take away my pain

I : Oh! My scooter is not starting up.


I was stranded in the road with heavy traffic and was calling out for help. He came on his bike covering his face with an handkerchief.


He then did some mechanical inspections and soon the scooter responded to him. But before I could see his face, he waved a bye and was gone.

There, I saw him again. This time he had no handkerchief on his face. Instead he had a thick beard.

Mr : Oh! It is you again. How come you are here? Handshake?

We shook hands and talked further. I learnt that his beard took its form in the absence of his love. Love failure - Oops!

At one point, he said, "Instead of her, it is now the beard"
We smiled and that's how our friendship bloomed.

Scene 3 -Beach
After three months of friendship, we become lovers. Mr. became Craig. I was waiting for him on beach. He came and I screamed with joy,

I : OMG! Is that you? You...you look damn hot! Lucky me :)
I bit my lips as I said those words but the fact remains. His clean shaven look bowled me over now.

Craig : Yes! My love has taken back its place once again. Do you have any problem getting kissed?
He was laughing hard and so was I. 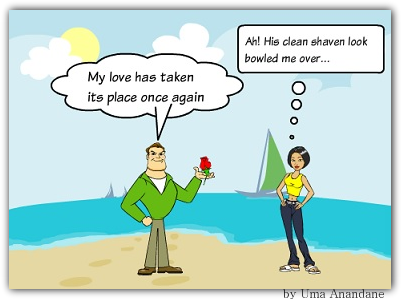 I would like to tag Cifarshayar, Simran, Saravana, Ekta and Sammyabrata for this post.
Accepting tag from Arvindji

This post is a part of the Protest Against Smelly Stubble Activity in association with BlogAdda.

Posted by Uma Anandane at 02:55
Email ThisBlogThis!Share to TwitterShare to FacebookShare to Pinterest