Hiya , I am posting my oldest and best poem "TITANIC". I wrote this after watching this touching movie...I was really touched that it ended me in writing a poem about it.


To read the book of the Sea
I started my life as a sailor
I traveled in a ship named titanic
Which I never knew, at end, would wreck
I saw all kinds of people, young and old
And the rich people dressed in emery and gold
To the view I could reach, I see
A tiny dot, the head of the harbor
I saw a baby boy cry so high
Which startled a brown-bearded guy
I went to the deck to look below
To view how beautiful the water flows
And to see how the shark paddles is fun
Under the great ship which runs 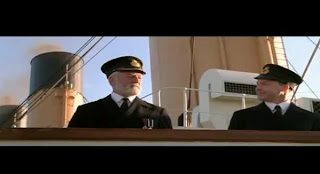 I could see my captain eyes so proud
Looking gracefully around the moving crowd
I went near him and gave him a smile
He said, “Oh! My boy we are almost near Nile”
Then at noon, I was asked to dine in a precious hall
Where good sketches and rare paintings decorated the wall
Sipping in great anticipation of pleasure
We made a simulating conversion of Titanic as treasure
Nearly three thousand people were on our sand
Along with merry cookers and bright solo band
Each had their own enjoyment and party,
The Upper class with wine and the Lower with tea Deep fear and horror struck my heart
When I heard of the ship going to have its last bath
Hit by the glacier gave the ship a big hole
Which is going to swallow the life of the whole
Sunset cloud carved with soft knife fill the sky
And our titanic with the pride of a tiger slowly moves by
Inside , the captain and the crew started away to find
A way to escape with a heavy heart and disordered mind
Soon the message spread out like swarm of bees in the air
And there seemed confused face with wrath everywhere
Soon plans are made to carry women and children in boats
Proving them and the next batch with swimming coat
Some men’s were fierce to escape and so made fuss
Yet some slept in silence in bed since they felt hopeless
Measures were made fast to preclude water from all places
Fighting with life and the water in a rat race 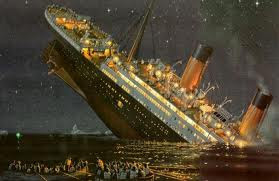 Bad! At last ,the ship was being sucked in like a dog’s bone
And some people nearly flat with fright gave a dull moan
One by one, the boats went on as it was decided
In front of those men who are growing pale and red
The great ship was being sucked in very fast
And still thousands of people were left at last
Our captain the real men was sad enough to miss
So went inside his room to give the ship his last kiss
Like bomb blast, waters stroke into the windows
Everywhere I could hear people cry and their furious roars
People who told that it was pleasure to travel in titanic
Now started to blame the ship feeling tired and sick
I tried to control the people with my gun
Targeting at those people who tried to run
Becoming rage at a man going away from my will
Off I got my gun and aimed at him to kill
He fell down giving me a startling look near my arm
And all the people around me was shocked to calm
Ashamed of my work, I aimed at my head with my pistol
I shot with a sudden jerk and down I fell
I could no more hear the cries coming from the Titanic ship
A wonderful treasure, which we had and still keep 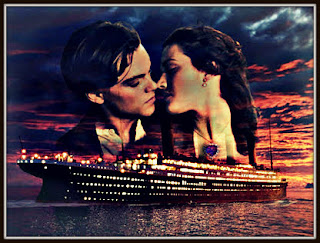 Hi , I request you all to watch this video from youtube.I have been very lucky to have got this ,very apt to my poem.